Mrs. Frankly and I laid our heads down on our very own pillows at 3:30 AM Sunday morning following a 24-hour marathon trip from St. Louis du Nord, Haiti. We left the mission compound exactly 24 1/2 hours earlier. In between, we rode a bus, six airplanes, a train, a van and a car to get home. The mission trip was amazing. The people in Haiti are in such need, and the folks at Northwest Haiti Christian Mission are making such a big difference. I'm putting together a blog for the folks from our trip to share their pictures and stories. It will be located at www.myhaititrip.com Check back often to see the latest.
Posted by Frank Weller at 12:45 PM 2 comments:

A New Take on an Old Prayer

David Gushee has an interesting take on the sinner's prayer in the online edition of Christianity Today. Here is what I had to say in response to his article:

"Radical trust calls for both belief and action." Gushee is right. If you take a look at the Greek word we generally translate "believe," you discover that it has three facets. Certainly belief, but also trust and response. In order to have a true biblical faith, I must believe - that is my head, I must trust - that is my heart, and I must respond - feet and hands. Therein lies the rub. For centuries, Christians have fussed over the question, "What is the appropriate response?" To be sure, the sinner's prayer is a response. But is it the most biblically correct response? I can't find it anywhere in the NT. So what is the biblical response? It is any number of actions - all of which can be found in connection with the Greek word(s) for salvation: repentance, confession, baptism, sanctification, and perseverance. The blood of Christ bought our freedom; we cannot earn forgiveness. But clearly there are actions we need to take to appropriate that for which Christ died.

Leaving for Haiti for a mission trip this weekend. I checked out the 10-day forecast on weather.com and it looks like we'll be in the nineties the whole time we're there. Wow! I am ready for some warm weather!

Pray for us while we're working with Northwest Haiti Christian Mission.
Posted by Frank Weller at 11:16 AM 1 comment: 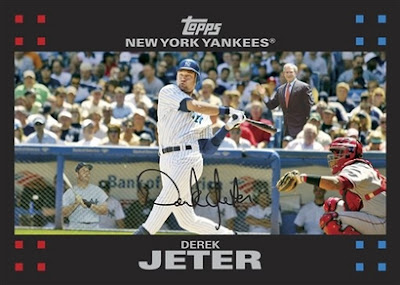 In this undated digitally altered image provided by the Topps baseball card company President Bush smiles and waves from the stands, right, and Mickey Mantle looks on from the dugout at left, as Derek Jeter swings his bat. A spokesperson for the Topps company said that somewhere between the final proofing of the card and its printing - when it was too late to stop it - someone within the company played a joke and inserted Bush and Mantle into the photograph.
(AP Photo/Topps)
Posted by Frank Weller at 11:14 AM 1 comment: 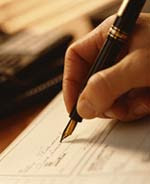 AP News is reporting that an Indiana man tried to cash a check from God at his local Chase Bank. Check it out:


(AP) - Kevin Russell found out it's not easy trying to cash a check from God. The 21-year-old man was arrested Monday after he tried to cash a check for $50,000 at the Chase Bank in that was signed "King Savior, King of Kings, Lord of Lords, Servant," police Detective Jeff White said.
Russell was charged with one count attempted check fraud and one count intimidation, both felonies, and one count resisting law enforcement, a misdemeanor. He could face prison time.

Police were called to the bank after Russell tried to cash the check, which was written on an invalid Bank One check with no imprint, White said. Russell had several other checks with him that were signed the same way but made out in different dollar amounts, including one for $100,000.

"I've heard about God giving out eternal life, but this is the first time I've heard of him giving out cash," White said.

No court date has been set for Russell. He was being held Wednesday at the Lake County Jail on a $1,000 bond.