I've invested some time in reflection these last several months. During the dark moments - and there have been many - I have reflected on the "could haves" and "should haves" in my life. I've ruminated over regrets. I've agonized over choices made and opportunities lost.

To be completely honest, it has been difficult. Painful. Draining.

I am forty-two years old, and I can't help but think that, by now, I should have gotten it together. When I was a younger man and I would make a mistake, those around me would chalk it up to youth and inexperience. When I would offend someone, they were quicker to look past my actions and assume the best about my intentions.

But those days are long past.

I have this sense that, by now, I should have fewer of those regrettable moments. There should be more distance between my relational missteps. And, actually, I think there are fewer of those moments, I think. I am more relationally adept. But at age forty-two, and in the work that I do, even a very occasional mistake seems to carry with it more consequence.

It's a Wonderful Life was on the television tonight. I can relate to George Bailey. George lived with regrets. And in the darkest moment of his life they flooded his mind like a tsunami. He saw the places he wanted to go but never did. He thought how his wife would have been better of if she had married Sam Wainright. He even went so far as to reckon that his family would be better off with a $15,000 life insurance settlement and no husband and father.

Is there any man who hasn't wondered if he should have taken a different turn at the crossroads of his life?

It is then that I cling to George Bailey. At the conclusion of Frank Capra's masterpiece, George learns that he really did make a difference. Maybe he didn't build sky scrapers or design railroad trestles, but he really did make a difference. At George's lowest point, Clarence, George's guardian angel tells him, "Each man's life touches so many other lives. When he isn't around he leaves an awful hole . . ."

There are a lot of things I guess I would do differently. But here I am. I haven't made a million. I am not the pastor of a mega-church. My mailbox isn't overflowing with speaking invitations.

Shop with a Cop (Chaplain) 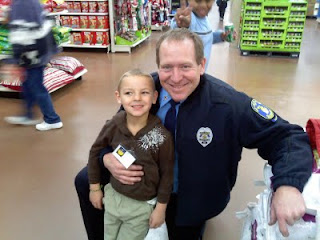 Last Saturday I enjoyed spending the morning with little Davey (not his real name) as part of the Lansing Police Department's Shop With a Cop program. We had a blast.

I'll admit that I was a little nervous at first. And when Davey's mom told me that he was really quiet and shy I was even more so. But when we loaded up to head out to the Wal-Mart, Davey began to loosen up. And why not. We were in line with over seventy-five police vehicles with sirens blaring and lights blazing - every little kid's dream parade! Davey and his brother rode in back while I rode shotgun with Officer George doing the driving. Questions and squeals of delight came from the back seat as motorcycle cops raced ahead to block the intersections between us and the Wal-Mart.

When we arrived Davey and I got in line to get his picture taken with Santa. We had to wait a while, but he was patient, if a little fidgety. When Santa and Mrs. Claus asked him what he wanted for Christmas he wrinkled up his nose and thought really hard before answering. I leaned in to listen but missed his reply. Then he hopped down, grabbed the cart and we headed off to the toy aisle.

Because of the generosity of the program's benefactors, each child was allowed to spend $100. the next hour was a test of my math skills and Davey's shopping prowess as toys went in and out of the cart faster than shoppers through a revolving door. Davey finally settled on a couple of GI Joe vehicles and a Star Wars storm trooper helmet and blaster. He remembered to get a gift for his mom, and his brother and sister, too.

When we headed to the cash registers to check out, he had a smile on his face and a twinkle in his eye. After a meal at Subway, we headed our separate ways.

Hopefully Davey will have a Merry Christmas. Because of the generosity of the LPD and the supporters of this program, over 90 children will have a brighter holiday. And, if any of the officers are like this police chaplain, I know their Christmas will be brighter, too.
Posted by Frank Weller at 5:56 PM 2 comments: