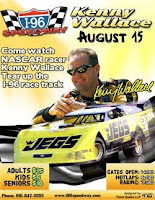 Saturday was a loooong day for me, but a great one. The day began with a speech at the ribbon cutting ceremony for Butler Public Library in Butler, Indiana. When I lived in Butler I was President of the library board when we embarked upon a facility expansion. I helped raise some of the money and got the ball rolling on the project, and then I left town. The new President, Larry Moore, together with Library Director Ellen Stuckey and his fellow board members picked up the project and saw it through to completion. And they did an amazing job! What a great way to start the day.

Then I headed back to Lansing where I performed two weddings. They were beautiful and went off without a hitch. I stopped in at both wedding receptions before heading over to I-96 Speedway where I drove in an 8 lap school bus race on their eighth mile dirt track. It was a blast! I started on the inside of the first row. When the flag dropped, my friend Fred Lab, who was positioned just outside of me, tried to cut me off in turn one. I hammered him. By the time we made it around turn two I had about half of my paint on the side of his bus and was clearly in the lead.

I maintained the lead for most of the race, but on lap seven things began to get interesting. Chris Rice, who is Kenny Wallace's crew chief was driving one of the other buses. Apparently he didn't hear track owner Mike Mouch's talk about sparing the radiators. He started banging into Fred's back end, and then into me! That pushed me up high on the back stretch enabling Rice and Freddo to come in underneath me.

Naturally, Rice and I made a Fred Sandwich. All down the back stretch we were hammering Fred. We went three wide into turn three with buses scraping and rubber burning. It was intense!

Chris Rice ended up winning the race with Fred a close second and me third. We finished with a length of each other, I think. We got the thing on film and, when I figure out how to download it, I'll post it up on Facebook.
Posted by Frank Weller at 12:19 PM 3 comments:

We always knew him as Uncle Kenny, even though we were not related. When my wife was in college she became acquainted with Lois, Kenny's sister-in-law. Tracy would often spend the weekend at Ben and Lois's home - weekends that often included family meals with bowls of steaming mashed potatoes and swiss steak made from venison. Kenny was always there with his quick wit and gentle spirit. When I married into the family, so to speak, I got to know Kenny, too.

For decades, Kenny cut hair in a shop on Farwell, Michigan's main street. His was the only place I was ever able to get a decent "flat-top" haircut. And though I wasn't in the neighborhood very often, I always made sure to stop in and get a trim when I was. His was exactly what you would expect of a Michigan barber shop. Pine siding on the walls. A stuffed "jackalope." A big mirror behind the barber chairs and Field and Stream next to a couple of seats where the next customer sat to wait his turn. (Or, just as often, someone who wandered in to shoot the breeze and left without ever getting a haircut.)

Kenny also ran one of the niftiest deer processing operations around. He and his family filled the garage with bucks every November. Deer were skinned in the garage and hung in a walk-in cooler before being tossed down a specially constructed chute into the basement where his sons, daughters and their various progeny worked at turning deer into "government beef." Kenny processed so many deer that he had to make sure to shoot his early on opening day - something he usually did.

It is appropriate that Kenny died on a Sunday, because Kenny is a Christian. As a pillar of the Farwell Church of Christ, Kenny and Jean were fixtures there every Sunday. These last several years have been hard for Kenny. With one health ailment after another, Kenny suffered in silence. Today he is free from all of that.

Psalm 116:15 says, "Precious in the sight of the Lord is the death of his saints." None more precious than Kenny.

I'll see you in Heaven, brother. Do me a favor and start lining up good spots for my deer blind.
Posted by Frank Weller at 5:35 PM 1 comment:

A buddy of mine told me he was in a public restroom the other day. A father was in one of the stalls with his obviously young son. The son was chattering on about this and that. The father was becoming more and more impatient and said to his son, "Why don't you just take care of your business?"

"Your business, you know go to the bathroom."

The son replied with wonder in his voice, "You mean you're gonna pay me for this?!"
Posted by Frank Weller at 1:52 PM No comments: