The Lansing State Journal reported today on the photo-copied note you sent to mosques throughout the U.S., including a mosque right here in East Lansing, Michigan. I'm guessing you have another ream of them all stamped and ready to deliver. (Did you use an American flag stamp?) But for the benefit of others who might not have read your tripe, I will post it here. 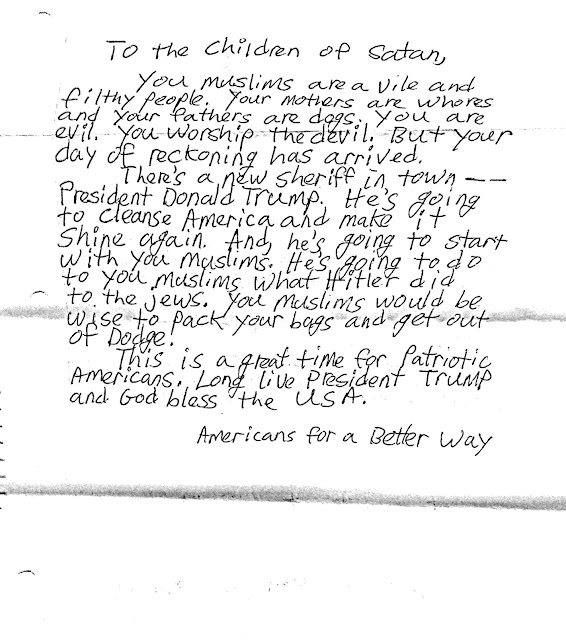 I don't know who you fancy yourself to be, but let me tell you who you are not.

You're not a Christian
Let's begin with that. "Christian" as a label has become so loaded with cultural meaning that many followers of Jesus won't even use the word. But let's be clear: Christian means someone who follows Jesus. Despite what you might think, you do not. Anyone who espouses hate cannot claim to follow the way of Christ. The Apostle John knew Jesus well. He walked, talked, ate, and ministered with Jesus during a three-year ministry intensive. Here's what John wrote about Jesus:


Dear friends, let us love one another, for love comes from God. Everyone who loves has been born of God and knows God. Whoever does not love does not know God, because God is love. This is how God showed his love among us: He sent his one and only Son into the world that we might live through him. This is love: not that we loved God, but that he loved us and sent his Son as an atoning sacrifice for our sins. Dear friends, since God so loved us, we also ought to love one another. No one has ever seen God; but if we love one another, God lives in us and his love is made complete in us. (1 John 4:7-12)

In fact, Jesus said, "They will know we are Christians by our love." Based on that definition, you don't make the cut. So please don't intone, "God Bless the USA" and claim to be a Christian. You're only making the rest of us look bad.

You're not a patriotic American
I'm guessing you think that you are. You probably have a USA bumper sticker on the back of your American made truck. You sport a flag belt buckle on your Wranglers and have a "Don't Tread on Me" flag hanging from your front porch. But you're not a patriot. Dress up a bigot in patriotic gear and you still have a bigot. Patriots don't write venom like you did. Patriots write:


O beautiful for pilgrim feet,
Whose stern, impassioned stress
A thoroughfare for freedom beat
Across the wilderness!
America! America!
God mend thine every flaw,
Confirm thy soul in self-control,
Thy liberty in law!

Patriots - great patriots - like Dwight Eisenhower would tell the aforementioned "author" and anyone else who worships the President-Elect,


Never let yourself be persuaded that any one Great Man, any one leader, is necessary to the salvation of America. When America consists of one leader and 158 million followers, it will no longer be America.

Mike Gonzalez, a Senior Fellow at The Kathryn and Shelby Coulomb Davis Institute for National Security and Foreign Policy wrote in his article on patriotic assimilation,


Thomas Paine, in the influential 1776 pamphlet Common Sense, likewise observed: “This new World hath been the asylum for the persecuted lovers of civil and religious liberty.” George Washington repeated the sentiment 12 years later almost verbatim when he wrote, “I had always hoped that this land might become a safe and agreeable Asylum to the virtuous and persecuted part of mankind, to whatever nation they might belong.” He also listed the traits Americans needed: The new country would welcome those who were “determined to be sober, industrious and virtuous members of society.”

Patriots do not fear immigrants. They foster them to become Americans.

You're not brave
You're a coward. A handwritten letter? An unsigned letter? I can picture you hunkered down at a Kinko's furtively glancing about, wondering when CIA operatives were going to high rope down from the black helicopters. You're a wimp. A feckless, milksop, namby-pamby weakling. Strong words? Yes, but keep in mind that I'm not calling for any ethnic cleansing.

If you think you can bring your hatred to East Lansing, you'd better come with more than your nameless scrawling. If you're going to attack our neighbors - whatever race or religion - you're going to have to go through the rest of us.

We stand together in Lansing, Michigan. And your hatred isn't welcome.
Posted by Frank Weller at 1:17 PM No comments: