Archie Bunker and the Politics of Donald Trump 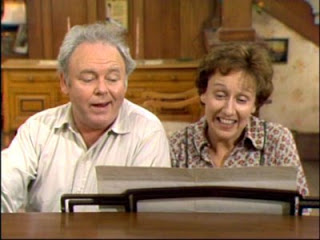 Back when our television took a minute to "warm up" my folks and I gathered around the set each night to watch reruns of Carrol O’Conner and Jean Stapleton’s hit show All in the Family. My dad cracked up whenever Archie insulted his son-in-law, Meathead. As a UAW factory worker Pop connected to Archie. I related to Edith in whom I saw my grandmother, a nervous housewife flitting about trying to keep peace between her husband and the kids.

The show began the same way each week: Archie and Edith sitting at the family piano singing the theme song before a live studio audience:

And you knew who you were then
Girls were girls and men were men
Mister, we could use a man like Herbert Hoover again

Watching the GOP debate tonight it hit me: Donald Trump’s demographic is the Archie Bunker vote. Folks who had what my late friend Rod Cameron called “a crawdad mentality - gazing longingly at the past while backing reluctantly into the future.” Fear is the root emotion for “guys like us” who “had it made.”

I get it. I understand.

I don’t like change all that much either. Even a lot of the good ones.

When I was a kid we’d get one, maybe two phone calls a day. We shared a party line with our three neighbors. If nobody was home you tried again later. These days I can’t get away from my iPhone. I was out of the office two days this week and returned to 133 unread emails, most of which were the modern-day equivalent of the JC Penney catalog and Ed McMahon telling me that I might already be a winner.

My great-great-great grandfather Joseph Weller moved to DeKalb County, Indiana in 1862. Most of the Wellers are still there. My grandfather lived (and died) on the same farm that his grandfather lived and died on. My wife and I moved eleven times in our first ten years of marriage. Now we live in Michigan. My sister lives in Africa. When she moved there we had to communicate by airmail on onion-skin paper. My daughter lives in Australia, and we speak face-to-face on Skype for free.

My high school had one black student, a guy who was rumored to have some beef with his basketball coach in Ft. Wayne. He transferred to Garrett High and started every game. Turned out his dad was my dad's boss at the plant; the whole school loved the kid. Still, our town was so white that our idea of diversity was crop rotation. Diversity is celebrated these days, as it should be. When I was at the grocery earlier tonight (buying lactose free “milk”) I overheard conversations in three different languages.

I knew one guy in high school that I thought might be gay. These days sexual identity isn’t just mainstreamed. For social conservatives it feels like it’s the whole river. All over America county clerks are striking the words “bride” and “groom” from marriage licenses. When I was a kid Bruce was on a cereal box; now Kait is, well, everywhere, it seems. Some church officials cover up sexual immorality and others wonder if they’ll be required to endorse it through forced same-sex weddings.

I’m guessing the rest of Charles Strouse’s lyrics to Those Were the Days were too politically incorrect, for even Archie:

Hair was short and skirts were long
Kate Smith really sung the song
I don't know just what went wrong
Those were the days!


Freaks . . . short hair . . . long skirts . . . judgmental words from folks who "don’t know just what went wrong." But Trump is counting on his electorate's uneasy feeling that something is wrong.

So when The Donald shouts, “I’m going to make America great again!”, what I suspect a lot of his supporters are hearing is that he is going to remove whichever of Archie Bunker’s pebbles have become lodged in their loafers.

I’m guessing that Trump knows even he can’t turn the clock back. Truthfully, I don’t think that matters to him. But he is counting on being able to get elected by promising that he can.
Posted by Frank Weller at 2:36 AM No comments: