When Chicago Cub second baseman Darwin Barney had a hot ground ball two hop its way through the infield grass Friday night, he had a lot to lose. For 141 consecutive games, Barney has patrolled the clay between first and second base with perfection. Not since Ryne Sandberg have Cub fans witnessed such diamond wizardry at second. 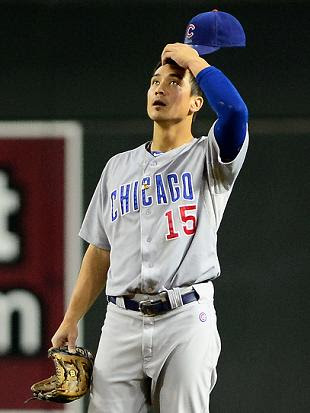 Coming into Friday night's game Barney was just nine innings away from breaking Placido Polanco's Major League record for consecutive error free games. When Justin Upton's sharp ground ball forced Barney to range far to his right, he was able to cut the ball off. And, had he just pocketed the ball, his streak would have been intact. It was ruled a hit by the official scorer after all was said and done.

But Barney is a gamer. So, with his momentum carrying him away from first baseman Anthony Rizzo, Barney turned and fired at first base, attempting to throw Upton out. Unfortunately, the ball was poorly thrown, and Rizzo was unable to pick the ball out of the dirt. As the ball squirted beneath his glove, Aaron Hill was able to score from third, having already advanced from second base on the ground ball.

And Barney was charged with a throwing error.

The thing is, nobody would have thought twice if Barney would have simply held onto the ball. I can't tell you the number of times, while coaching my son's little league team, I've shouted to a fielder in the exact same circumstances, "Eat it!"

Just hold onto the ball, Barney, and the runner will have to hold at third. But, more importantly, the streak will be intact. Just three more outs and your name goes in the record book and your glove goes to Cooperstown.

But that is not the way Darwin Barney plays the game. He plays all out. He takes risks. Even risks that have the potential to hurt him, personally, if they will benefit the team, corporately.

After the game, when asked about the end of the streak, Yahoo Sports reported Barney saying,


I've got to make that play. . . It was 5-3 at the time. We're in that ballgame. My job is to make plays regardless of taking risk and I think I've done that through this whole little run. That's just how you play the game. You can't hold that ball right there."

My job is to make plays regardless of taking risks.

I wonder how many times I have avoided taking a risk that might benefit my team because the personal downside was too precarious?

Of course, there are those who will point out the hapless Cub's record. They're closing in an 100 losses  this season, after all. Why bother with perfection when your team is 36 games out of first place?

But I would argue that makes his pursuit of personal achievement even more significant, just as it makes the risk he took Friday night more noble. Whenever I subordinate what benefits me to what benefits the team we win even if I lose.

Way to go, Darwin Barney! Thanks for the inspiration, the reminder.

Now, if the Cubs could get a few more guys that field like Darwin Barney and hit like Justin Upton. Can I get an "Amen" from Mark Christian and the Sprunger brothers?