Pennies, people, and things that matter . . . 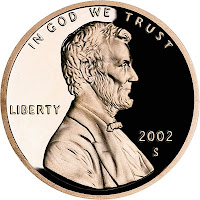 My friend, Paul, took me for a spin in his new mini-van the other day. Aside from the fact that Paul surrendered and is now driving a grocery getter in anticipation of the imminent delivery of his firstborn child, I learned something else on the trip. Paul is frustrated by one of the vehicles accessories - or the lack thereof. Paul's vehicle, like many others, comes with a spot for coins. Just not a spot for the pennies.

There is one for quarters, dimes and nickles, but President Lincoln is just out of luck, I guess.

Naturally, I was compelled to check each of my vehicles. Turns out Paul isn't the only one that got short-changed (sorry - couldn't resist). My vehicles are similarly configured. My Dodge, in fact, even has a spot for fifty cent pieces, but nary a place for a penny.

Paul and I considered why that was so. I finally settled on this explanation: you don't use pennies for tolls and meters so the designers didn't include them. That was preferable to my more cynical conclusion - that pennies are just worthless. Turns out there are a lot of folks that think that way, including a congressmen and a biophysics professor from Berkeley.

And yet, there is strong opposition to pitching them penny from folks who long for more nostalgic days and from those who love Abraham Lincoln too much to confine him to the five dollar bill.

Pennies might be worthless, or they might not be. The thing that I find striking is how some folks have the same attitude about people. Some look at their neighbor and find him or her a waste of time. Some think they're too much trouble. They're a waste of resources; they have no apparent purpose, but instead are just left over from the transactions that "really matter."

I'll admit that, while I've never consciously voiced that opinion or even consciously thought it, may actions have communicated, from time to time, that people don't matter.

There are no useless people; no societal "leftovers." And while there might not be a spot for a penny in my mini-van, I hope there is always room for another person. Because people matter.

Come to think of it, I think I like pennies, too. Turns out that one of the leading proponents of keeping the penny is a guy named Mark Weller (a distant cousin perhaps?). His organization, Americans for Common Cents, lobbies in Washington, D.C. for the penny's preservation.

And, if we're going to lobby congress for the preservation of something as relatively insignificant as a penny, then I am certainly going to do all I can to preserve people.
Posted by Frank Weller at 11:57 PM 3 comments:

Take the next step 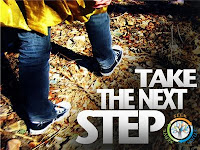 The thing is, spiritually, we never arrive. There is always something more. Some other challenge. Some "next step" that we are called to take.

Take sanctification. ("Please!" some would say.) Just when the Holy Spirit cleans up one part of my life and I begin to think I am finally getting the hang of this faith thing, God reveals another area of my heart that needs swept clean. I'm reminded of the Mennonite Bishop that told his protege, "When you've been practicing the discipline for forty years it goes this much easier," as he held his thumb and forefinger a fraction of an inch apart.

Or what about service? God - though never demanding more than He was willing to give (and gave) - always urges me to do more. Paul expressed it this way:

I'm not saying that I have this all together, that I have it made. But I am well on my way, reaching out for Christ, who has so wondrously reached out for me. Friends, don't get me wrong: By no means do I count myself an expert in all of this, but I've got my eye on the goal, where God is beckoning us onward—to Jesus. I'm off and running, and I'm not turning back.

God always challenges his followers to take the next step.

What is the next step for you?

Over the course of the next four weeks, South is going to be exploring this idea of taking the next step in your spiritual journey. At the conclusion of that series, on October 4, I will challenge you to take the next step - wherever God is leading. And, there is a concrete, specific way that you can demonstrate that you're going to do so.

On Sunday, October 4, I am asking every person that commits to taking the next step to bring a pair of new or clean used kid-sized boots or shoes with them to church. We'll be donating them to kids that need them. Can't afford boots or shoes? No problem - bring a new pair of socks. We'll gather them all up and distribute them where they're needed.

Your generous donation will serve two purposes. First, it will signify that you're going to take the next step in your faith journey. You're going to go where God wants you to go - whether that is joining a study group, or committing to a regular time alone with Him, or diving into an area of service. And, in a very real way, your donation will bless a child with warm toes this winter.

I hope you will join me and take the next step.
Posted by Frank Weller at 6:00 PM 4 comments:

My daughter and her Indiana friends made this distorti . . . er adaptation of the Disney classic, "I'll Make a Man Out of You," from the movie Mulan. Wow!