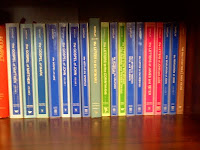 I grabbed my copy of William Barclay's commentary on Romans this morning to examine his thoughts on Romans 14. My Christian Doctrine professor, Mr. Fisher, frequently warned us against using Barclay as he denied the miracles of Jesus. Or at least that is what I recall him saying. Still, good ol' Bill has helped me understand the Jewish-ness of the New Testament, and I find that he adds to my understanding of scripture more often than he takes away from it.

The book is part of a complete set of Barclay's Daily Bible Study Commentary. My associate, Wally, has his commentaries scattered in scriptural order. All the Luke commentaries, followed by those from John, then Acts and so on. I prefer to keep them in sets. There is something about having similar bindings together that gives me a feeling of orderliness. My College Press commentaries have faux marble dust jackets and sit on the second-to-top shelf. Keil and Delitzsch, with their gold lettering on brown cloth reside on the Old Testament section just above James Smith's five volume Old Testament set. I know where they all are and they, staring at my back while I work, seem to know where I am, too.

The sets look uniform. All of them, but the Barclay, that is.

Bill's books are nearly all paperbacks. Most are blue; a couple are green; and two are even hot pink. And one - Romans - is the lone hardcover, a cloth-bound island in a sea of paperbacks.

The hardcover - the only one in the series that I ever paid for - I purchased from Claudia McGilvery, the proprietress of The Christian Bible House in Kokomo, Indiana. Claudia and her husband, Bill, were members of the first church I served full-time, the Kokomo Church of Christ. Her cramped little bookstore on Lincoln Avenue was longer than it was wide, and it was packed from floor to ceiling with books, curriculum and all manner of teaching aids long before WWJD bracelets and "Bud-wise-up" t-shirts began littering the Christian landscape.

I don't remember why I bought the book. I was a youth and music minister back then and preached maybe three, four times a year. One of those must have been a sermon from Romans.

Normally, a multi-colored, odd-book-out set would offend my sense of order. (The more cynical reader might say, my obsessive compulsive disorder.) To the contrary, the motley assortment of colors and coverings is a reminder of how I came to own them. They were gifts from Violette.

Claudia was amazing, so when I moved to Butler, Indiana to become the preacher at the Butler Church of Christ, I was surprised to find another, equally godly Christian bookseller - Violette Patee.

Violette was a pioneer in Christian retailing. I could write a whole column about her alone - how she went sixty years without missing a Sunday; how she broke her leg on the way into church, taught Sunday school, and then went to the hospital to have it set. But the lasting impact that Violette had on my life is in my library.

One October - it was pastor appreciation month - Violette sent our church secretary on a clandestine mission to find out what commentaries I had, or rather didn't have. When she learned that my "set" of William Barclay consisted of my lonely Romans volume, she gave me a couple more to keep him company. The next year she did the same. Occasionally one would show up at Christmas. Before too many years, the set was assembled, as Johnny Cash sang, "one piece at a time, and it didn't cost me a dime."

Violette passed away one August a few years back, and I was privileged to preside at her funeral. And yet, years after her death and over a decade since she gave me the first of many, many books, I can't pick up one of Violette's books without feeling the imprint that she left on my life.

My Violette books are emblematic of my life, really. I am who I am because, like my library, people have contributed to me bit by bit, patiently adding worth here and there, refining, carving, and polishing. There is very little that I have achieved on my own. (Is there anything at all?)

My son's band, the Grand Ledge High School marching Comets, perform their field show at the 2009 Grand Ledge Exhibition, performing selections composed by Dmitri Dmitriyevich Shostakovich Wednesday, October 7, 2009. (The last several seconds are, regretably, cut off on this video as I ran out of memory on my video card.)
Posted by Frank Weller at 9:51 AM 1 comment:

Inspired play from the Junior Comets 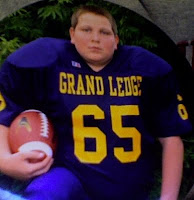 Jonah's 8th-grade football team defeated a determined Dewitt squad earlier today with a last second goal line stand that will be remembered long after these boys stop dreaming of NFL glory. It was their second such defensive denial of the game.

Previously, with the ball spotted at the Grand Ledge one yard line, the Dewitt boys lined up for a fourth and inches first-down try.

All day long the Dewitt squad had run behind their huge left tackle, a surprisingly athletic eight-grader that was listed on the roster at 305 pounds. With their backs to the wall, the Junior Comets called on their goal line defense package to come in and plug the gaps. My son's task: stop the Panther's enormous left tackle from plowing a path through the Comet defense.

When the ball was snapped, the D-line fired off and stuffed the Dewitt runner for no gain. With the ball turned over to the Comets on downs, the scoring threat was averted.

The Ledge took an 18-7 lead into the fourth quarter, but that was quickly trimmed to 18-14. And, with time running out, Dewitt was threatening to score again. Masterfully working the ball down field in as fine a hurry-up offense as I have ever seen executed in eighth-grade play, the Junior Panthers were threatening to snatch the victory away from the Comets. With first-and-goal, a pair of timeouts and thirty seconds, they hammered away at the defense pushing the ball all the way to the Comet two yard line.

After their final timeout, with only twelve seconds left on the clock, the Junior Panthers hustled to the line of scrimmage where the ball was spotted less than six feet from victory. Once again they ran behind their massive left tackle, who by now was referred to by the Comets simply as, "Mountain."

Once again, the Comet defense held.

I have never been more inspired by of proud of my son's effort on a football field.

At the conclusion of the game, as we were slowly walking across the field with a chill wind blowing in our faces, Jonah said, "Dad, I hit that guy as hard as I could, and every time I did, it hurt."

Maybe so, son. But I am pretty certain it hurt him, too. And you have a win to show for it.