Something I re-read today reminded me of the impact that Christians have, and the potential for positive impact they can have. Bill Hybels, in his book, Just Walk Across the Room, writes:

Recently, I received a five-page letter from an area waitress who is part of Willow Creek. Before becoming a Christian, I learned, she waited tables at a restaurant where many of us would eat after weekend services - and where Christians from other churches would hang out as well.

"Please let me convey a few things about Christians from a non-Christian waiter's perspective," her letter began. "It's quite well-known among waitstaff that when tables of Christians get seated in your section, it will be anything but a positive experience. Christians are demanding. They tend to stay at tables for a long time. They often try and push literature. And they rarely tip generously." . . .

Her letter continued as my mind trailed off, dismayed over the indictment. She explained that the waitresses she worked with had finally landed on a rotation schedule so that a particular server wouldn't always get "stuck with the Christians." Five pages later, I reminded myself that this letter was penned by a woman right inside of our community. What does this say about Christ-followers when we neglect something so basic as treating a server with kindness, respect, and gratitude? I wondered.

How easily we forget that every person we come across is a person God loves. A person God has put in our path for us to be respectful toward. . . . Someone for us to serve by behaving with a Grander Vision Living attitude: "If you are scrambling and don't have time to refill my coffee cup just yet, don't worry about it. I can wait. I would be happy to wait, in fact." This should be our attitude, because last time I checked, we have the Holy Spirit living inside of us. . . .

I have a phrase that I communicate to servers on a frequent basis: "You have served me well." And when I find myself in the same restaurant consistently, after I tell them again and again that they have served me well, I typically add, "And if there is any way I can server you, please let me know."

That is great advice that I need to take to heart. If I can begin to see each person as a divinely appointed Christ-encounter, then I suspect that more people with whom I come into contact will come to know Jesus.

I would love it if I my fellow Christians and I were so well known for our kindness and generosity to those who serve us that I begin hearing, "Thanks for the tip. Are you by any chance a Christian?"
Posted by Frank Weller at 11:22 AM 3 comments: 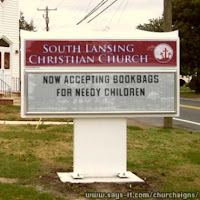 I was out of town camping. My Administrative Assistant, Melissa, took the call. Twenty-five minutes later she put the phone down exhausted from the tirade she had just endured.

Apparently, "needy" is a racial slur. At least that is what the caller told Melissa.

Our church is collecting school supplies to give to neighborhood children that are in need of them. That's why Terry, our designated church sign changer, put on the sign out front, "Accepting book bags for needy children."

"I've been driving past your church every day for a week, and today I decided to call," yelled the lady, er, um, woman. "You might as well just put, 'Bookbags for n------!'" her rant continued.

Yes, she actually said that.

The woman went on to indicate that she works for a social service agency. She declined to say which one. She did not leave her name or number.

No good deed goes unpunished, and this isn't the first time.

Two years ago it was peanut butter.

In 2008, our church was asked to collect peanut butter for distribution in Haiti. Through the generosity of our community, several news agencies, and our church partners, we were able to send 9,000 or so jars of peanut butter to our missionary friends.

That's when the emails from angry Mennonites began. (I didn't even know Mennonites got angry.) Apparently there was a list of some sort, and my email address was mailed to every person on it. I was accused of paternalism, colonialism and a couple of other -isms that I didn't know existed. I was told I was destroying the Haitian peanut economy.

Unlike the bookbag "incident" the email approach gave me an opportunity to respond. I emailed each of the folks that contacted me and said that I would love to connect with them and learn how we could more effectively bless the Haitian people. "If you have ideas," I wrote, "I would love to hear about them. Let's partner together."

There are some folks that are just critical. They have, as a friend tells me, "the spiritual gift of voting no."

No good deed goes unpunished. But I'm not ready to give up on good deeds - not yet, anyway.

When the book is closed on my life, or my church's, if folks want to say, "In his pursuit of doing good, he sometimes messed up; he sometimes made mistakes," so be it.

I'd rather get it wrong sometimes that to sit on the sidelines and hurl criticism and insults at the ones laboring in the sweat and blood of the arena. Put that on my tombstone.
Posted by Frank Weller at 10:01 PM 2 comments: