When my friend Dave sent me a link to an article from Psychology Today with the the title "Do Religious People Have a Hotter Sex Life?" it got my attention. I am in the midst of a three-week sermon series that is focused on women and that the third of these sermons addresses how men and women relate in the bedroom.

And then there is my choice in vocation. Most would agree that a pastor qualifies as a "religious person," so it would appear that the article speaks directly to my profession.

Then again, not quite the way I thought it would.

In short, the article suggests that religious people are having lots of sex. Just not with their spouses, unfortunately. Dr. Nigel Barber, the article's author, has the research to back up his claims. Consider these troubling statistics:
Why the inconsistency?

Dr. Barber suggests that one of the causes might be what psychologists call "the white bear effect." That is, tell someone not to think about a white bear, and that becomes all they can think about. With regard to sex, he opines that a similar effect may be at work. The more religions tell people not to engage in illicit sex, the more they want to do so.

Although Dr. Barber might disagree - he recently authored the book Why Atheism Will Replace Religion - I think there is something deeper at work here. A spiritual dimension. Christians call it, "spiritual warfare." The Apostle Paul put it this way:

The church of Christ in ancient Corinth knew something about spiritual warfare.  In his letter to these Christians who were acting as salt and light in a culture that was imbued with sexual licentiousness, Paul urged his fellow Christ-followers to win the battle of the mind. He told them to "take captive every thought and make it obedient to Christ."

In this respect, maybe Dr. Barber is on to something. The solution is not simply, "try not to think about it." But rather to embrace sexual thinking; to acknowledge the thoughts and redirect them. To take them captive.

For too long Christians have tried to refrain from indulging their sexual appetites when, in fact, we need, instead, to retrain them on the spouses that God gives us to enjoy. Here again, Paul speaks to this:


Now regarding the questions you asked in your letter. Yes, it is good to abstain from sexual relations. But because there is so much sexual immorality, each man should have his own wife, and each woman should have her own husband.   The husband should fulfill his wife’s sexual needs, and the wife should fulfill her husband’s needs. The wife gives authority over her body to her husband, and the husband gives authority over his body to his wife.   Do not deprive each other of sexual relations, unless you both agree to refrain from sexual intimacy for a limited time so you can give yourselves more completely to prayer. Afterward, you should come together again so that Satan won’t be able to tempt you because of your lack of self-control.

In short, Paul counsels the Christian husband and wife to have sex, and lots of it.

It would be interesting, and probably more than a little illuminating, to learn how the level of sexual satisfaction within a Christian marriage relates to the statistics cited in the aforementioned article. I frequently tell couples that each of them is their spouse's first and best line of defense against sexual temptation. In other words, something that our great-grandparents said is probably quite true: when the home fires burn brightly, a man (or woman) is less likely to seek warmth somewhere else.

I suggest you and your spouse test that theory out. Frequently.
Posted by Frank Weller at 12:02 PM 2 comments:

Posted by Frank Weller at 3:42 PM No comments: 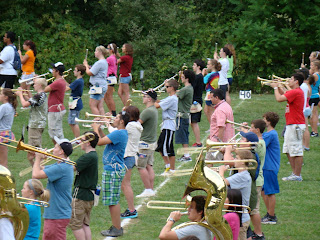 The sun is low across the lake. It has been cool all day with an unusually high humidity for an August afternoon. Sound travels far in this heavy air. I'm sitting on a picnic table outside a dorm with a Native American name I can't pronounce.

Fifty yards away, the percussion section bangs out eighth-note triplets. To my left the tubas are practicing scales. I can feel the notes slapping against the wall of the dorm. The trombones are playing the Grand Ledge High School Alma Mater off to my right. The trumpets - out of sight somewhere between the tubas and trombones - are working their way through I Dreamed a Dream from Les Miserables. And, in the midst of the dissonance, the flag corp is on the outdoor basketball court tossing their flags in rhythm to a Lady Gaga tune. (They've somehow managed to drag a stereo to camp so Gaga can make her contribution to the musical mayhem.)

I wonder what the neighbors' reactions are to this Sunday night cacophony. I wonder if they have any idea how blown away they'll be in about thirty minutes when the sections come together on the hastily marked out football field to play the fight song. When Mr. Blackmer hits the ignition switch on this nearly 200 horsepower music machine with trumpets blaring and percussion snapping out a rhythm that echoes through the meadow down to the water's edge and beyond.

It is an awesome thing when the band finally comes together on Sunday night.

But for now - on Sunday afternoon - they're in the sections. Doing their own thing. Making noise instead of music.

I wish it didn't remind me so much of Sunday mornings.
Posted by Frank Weller at 11:25 AM No comments: