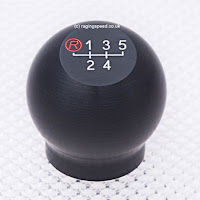 Our youth minister, Chad, is looking to sell his Jeep Wrangler. The funny thing is, he bought it just a couple months ago. When he made the purchase, he was puzzled. The Jeep was a four speed, but the knob on the gear shifter had a 5-speed pattern on it. His solution? Go to the junkyard and get a knob with a four-speed pattern. (I think we all have some OCD tendencies, actually).

Come to find out, it actually is a five-speed. The real problem was with the transmission.

Frankly, I do the same thing a lot of times. There is a problem, but rather than deal with it, I buy a different knob and slap it on. My effort at redefining normal doesn't change anything for the better, it doesn't fix anything, but it sure makes me feel better. So here's to you, Mr. put-a-new-knob-on-it man. As my old friend, Terry Ulm used to tell me, "When confronted with something uncomfortable . . . try not to think about it."
Posted by Frank Weller at 1:57 PM

Frank, That so sounds like Terry! Glad I found your blog through Soren!