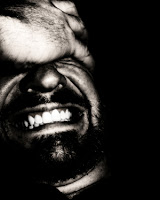 My friend, Julia, was spotting her fiance, Rob, during his workout yesterday when he dropped a dumbell on her toe. Dr. Terrie checked it out and drilled a hole in the toenail to relieve the pressure. (Keep in mind I'm getting all this second-hand, so I could have the facts wrong - not that I would ever let a little thing like the facts get in the way of a good story.) I hear tell there was plenty of blood and, a couple of x-rays later, Julia walked out of the medical center wearing a stylish new shoe which she was sporting at church this morning.

It sort of reminded me of an event from my college days. Thad Beard and I were playing ping-pong in the administration building. It was late at night, and I was supposed to be making rounds as a student security guard. The thing we usually did, though, was play ping-pong, eat pop tarts from the cafeteria, and read the Civ and Lit books from the library's reserve shelf. Thad and I were involved in a hotly contested match when he cracked off a big smelly one. I yelled "doorknob!" and commenced to chasing him. In college, yelling "doorknob" meant that a person had complete license to pummel the "flatulant" until he was able to locate and touch a doorknob. This provided a reasonable means of keeping dorm rooms odor free, but proved particularly difficult on long road trips.

On this particular night, Thad raced from the ping-pong table to the nearest door with me on his tail. Just before Thad reached the door I lunged at him. With all my weight going forward, my descending foot caught Thad's ascending heel. Something popped and a pain shot up my leg that dropped me like third period French. A trip to St. Lawrence Hospital revealed that I dislocated my big toe. It hurt like a son-of-a-gun.

As I told Julia earlier today, it is amazing how much pain such a small a part of the body can cause.

I think that is true in the body of Christ, too. Over the years I've learned that one person can cause considerable pain in the church. Occasionally that person has been me.

As I lay in the ER at St. Larry's, I would have been happy for the doc to tell me he was going to cut off my big toe if it would have stopped the pain. That's how we often handle the "extra grace required" Christians in our churches. Someone causes too much irritation and we chop 'em off. Sometimes its necessary. Bob Russell says that there are three reasons to remove a person from the Body: heresy, sexual immorality, and divisiveness. I agree with him. It's better to cut off the toe than to allow gangrene to infect the whole body. I wonder, though, if there are times when we chop off the "appendage" out of convenience rather than necessity. Shouldn't we be more graceful?

Looking back, I'm glad the doc reduced my dislocated toe rather than removing it. Maybe I can learn to do the same with folks who cause the rest of us pain from time to time. And if a blockhead like me can learn, maybe you can, too.
Posted by Frank Weller at 11:30 PM

Hmmm, is this 'fiance' thing official?

One time, in 1992, while sparring with two other blackbelts, I had blocked a high kick with my forearm and and the force of the block and the kick coming together caused the attacker to have to drop back to gain his balance. This gave me the quick moment to turn my head and see a punch coming at my head from the other blackbelt and after blocking and countering, I spun around, knowing full well I'd be blocking another kick or punch or elbow, As I turned back to the first attacker(mind you, this is happening at breakneck speed-no pun intended), I felt, more than saw, a side kick coming toward my ribs. My left hand made a sweeping motion to deflect the kick, which it did, but at the same time I heard a crunch , and like you, I felt immediate pain shooting up my arm into my shoulder. I spun away and look at a completely dislocated ring finger. It was so bad that my wedding ring had to be cut off, and I had to have reconstructive surgery. At the time, they were cutting the ring off, I was thinking, "I wonder if they just went through the finger if that would stop the pain." I can certainly identify with your toe incident, but I sure am glad they didn't take the finger, but chose to do surgery to save it. I will never have 100% mobility in it, and it took months of healing and therapy, all for just a finger. But that is the same with grace...the process may be long and painful and require diligence, and though healing will come, there will always be scars and the person requiring the grace may not have the mobility they once had in the kingdom, as a safeguard to the kingdom. However, God may take them with all of their flaws and allow them a ministry that would have never opened up if grace had not been given. Dean Trune once said in a message, "We all need more grace."
But with that grace, my friend Mark Christian says, "God can fix anything, as long as we don't keep breaking it."

You could have at least posted a picture . . . I think Joe has a good one of the procedure. In fact, there were no dumbbells involved, unless you count me for resting my toes in a decidedly dangerous place. I think we're going to have to get rid of that particular piece of equipment.

I think that there may be multiple lessons from this experience. The last four weeks have been incredibly busy and fast paced. Last Thursday I was struggling with fatigue & a little anxiety over all that I needed to do or was committed to do. As I'm sure it is for many of you, busyness is a struggle for me and more importantly it gets in the way of my relationship with God and HIs people. I have found that my habit of "doing" directly interferes with my ablility to "listen". Not to say that this accident was a result of divine intervention, but it has significantly slowed my pace. Because of the pain killers I've gotten more sleep in the last couple of days than I have for weeks. And now I'm stuck at home -on the couch. At first I thought, "What a waste", but I've since realized I could catch up on my Bible reading and review some prayer material. Good stuff.

There is also a lesson here for me on pride; asking for help and allowing others to "be there". I've had to ask some friends to pickup my car (no driving) - which they graciously did; my sister bought me groceries (cupboards were bare) and now Rob has the dubious pleasure of driving me to work bright and early tomorrow and prbably the next several days. That is sure to be a relationship builder.


And, Debbi, guess you'll have to see on Sunday!

Oh Julia, I can't wait until Sunday! I am just so excited (I think I already know what the answer is...). You know how long Terry & I have prayed for this relationship (even when you weren't ready for it to be a "relationnship". Anyway, that toe sounds absolutely painful. I guess I will have to mention to Jamie about Sunday (she's going to be here, so she'll be anxiously waiting also).


did you have to call a Toe Truck?

Totally unrelated to the pain and inconvenience that Julia is experiencing...for which I continue to pray....I can honestly say that after knowing Rob for 37 years, 8 months, 1 week, and one day....I have never known the phrases "work out" and "Rob" to be synonymous or, for that matter, used in the same sentence. Once again, the theory that there is nothing that motivates like a Christian Woman has proven to be true.

I was single-handedly carrying two 300lb blocks at the time, I was about to accidentally drop one on a defenseless child, and Julia jumped in and kicked it away as it was falling.

And yes, she is officially my fiance'.

If only I could figure out how to do the e with the ' all in one and make it look cool.

Yeah!!!! Rob, we are so happy for you and Julia!!! God has answered lots of prayers. Terry considers Julia as one of his daughters, so I'm sure you will be getting his "lecture" on Sunday. Congrats!!!

Do cool and weather man go in the same sentence?

Hey! Frank was trying to make an Biblical application about his TOE and the comments are gossiping about Julia and Rob. Everyone needs grace. Rob you are going to need a little extra, because you will never live this one down. Next Sunday the ladies will be fawning over Julia and the guys will be "sharing" workout stories with Rob. Sounds like a good fellowship time. Maybe we should all have lunch at the church and call a congregational meeting.

So Rob have you considered a toe ring.

God is truly amazing. I came to this to ask a friend and question and God used this blog to minister to me. Amazing. Thanks for following your calling Frank. You are a blessing.