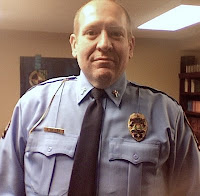 Last Friday I watched Abby get all dolled up for the Everett High School Prom. She and her friends from South's youth group all went together and, even though she attends Grand Ledge High School, they fixed her up with a guy from Everett so she could hang with them. Tyler was the young man's name, and he seemed nice enough.

Even though I just met Tyler, I wasn't worried about him. As I said, he seemed nice enough, and besides, Abby had just completed a Lansing Police Department self-defense course. She had already spent some time showing her brothers and I her new moves. For her final exam, in fact, she defended herself against LPD Chief of Police Mark Alley. He suited up in a specially padded outfit and attacked her, and she kneed him in the groin and punched him into submission. Frankly, I don't want to mess with that girl.

Still, one doesn't just send his daughter into the night without a reservation or two. So I put on my bullet proof vest and chaplain's uniform and went for a ride along with LPD Sergeant Emmons. I reasoned that, if there was a problem, I would be able to get anywhere in the city rather rapidly, and would have unparallelled communications.

The night was interesting, to say the least. We began with bar checks. We drifted in and out of several downtown bars. The Cadillac Club was slow. Things were dead at The Firm. Across the street, though, at Club X-Cel the place was jumping. The Sergeant and I found ourselves surrounded by a passel of drunk co-eds who wanted to dance with a cop in uniform. I shot the Sergeant a get-me-out-of-here look and he plowed a path to the door. He found the whole thing pretty amusing.

We checked out the bars in Old Town - including my first (and probably last) gay bar. Frankly, it was the coolest spot I was in all night. The owner is a gifted artist who personally made all the artwork and furnishings. We checked out some city parks, too, including the fish ladder where the salmon will soon be leaping their way upstream to spawn.

As we were headed to Rum Runners to check it out we received a call about a shooting on the North side of town. We raced across town with lights and sirens and arrived in fairly short order. As we turned the corner, the first thing I saw was a girl in a prom dress. My heart skipped a bit as the dad in me wondered . . . Abby had no reason to be in this neighborhood. In fact, I knew she had planned to be in Ovid by this time, but still, I couldn't help but be a bit concerned.

When we pulled up, the victim was being loaded into an car by several friends to be taken to the hospital. The police delayed them until paramedics could arrive, which they did moments later. From that point on, the whole situation seemed like something out of a movie. Police canvassed the neighborhood and interviewed neighbors. They questioned a group of partiers that were near where the shooting occurred. They looked for evidence.

After the scene was secured, the Sergeant and I headed to the hospital. I was able to pray with the victim's family in the waiting room. As of this morning, I am uncertain how the victim is recovering. We continue to pray.

For the first time since moving to Lansing, I experienced the reality that this is a city. I have known that, of course, but Friday night I saw it up close and first hand. It is eclectic and alive. We are a multicultural, energetic place filled with life and excitement. We're not a utopian community, to be sure - did I mention we stopped a man with crack cocaine in his pocket Friday night - but Lansing is, relatively speaking, a very safe community. The murder rate here, for example, is less than in Ft. Wayne, Indiana - the nearest large city to where I used to live.

Still, that is little consolation for a dad who watches his first born spread her wings and begin to live more independently.

It is, all in all, a lesson in trust. Trust in my daughter. Trust in her judgement. Trust in our community. And trust in God. For that part - the part that is teaching me to trust - I give thanks. The rest of it, I'll just endure.
Posted by Frank Weller at 1:30 PM

Julie said...
This comment has been removed by a blog administrator.
1:30 PM

Anonymous said...
This comment has been removed by a blog administrator.
9:34 PM

Anonymous said...
This comment has been removed by a blog administrator.
9:14 AM

Anonymous said...
This comment has been removed by a blog administrator.
2:36 PM

Frank Weller said...
This comment has been removed by the author.
8:52 PM

Stacie Supporter said...
This comment has been removed by a blog administrator.
8:53 PM

Frank Weller said...
This comment has been removed by the author.
9:54 PM

Anonymous said...
This comment has been removed by a blog administrator.
9:25 AM

Anonymous said...
This comment has been removed by a blog administrator.
1:13 AM

I know Mark Alley! I went to daycare with his kids. Lansing may be a city, but it's still a VERY small town.