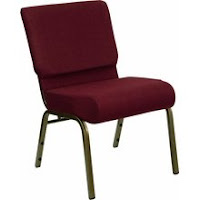 Paul, a gentleman that attends our church, is a highly functioning developmentally disabled older adult. He's a great guy. He lives on his own, washes dishes at one of the MSU cafeterias and can't clap in rhythm to save his life.

He sought me out immediately after yesterday's announcement at South Lansing Christian Church. Usually Paul buttonholes me before church. We chat about the Spartans, his job, where he's going on vacation, that sort of thing. For him to find me after church is unusual, and I could tell by the seriousness of his tone and his expression that the announcement was difficult for him.

"I'm really going to miss you guys, Frank," he said.

"Since we're not going to have church anymore."

Heart breaking I said, "Paul, we're still gonna have church! I don't know if it will be here or somewhere else, but wherever it is, you're going to be with us. If I have to, I'll come and pick you up, but you're going to have your seat on the front row!"

He smiled and said, "That's good," and went on his way.

Wonder how many other people are wondering today if they're going to be left behind.
Posted by Frank Weller at 4:59 PM No comments:

Mike Blakely, Elder at South Lansing Christian Church, announced this morning that the church will be leaving the building. With a mortgage payment of $15,500 a month and offerings falling about $2,000 short of our $11,000 weekly need, staying is no longer tenable. Unless something changes quite soon, we will be making plans to meet somewhere else.

Here is the video of Mike's announcement and my introductory and closing comments.

View from the pew

Our family visited Wave Church in Virginia Beach, Virginia this morning. We went with some friends that moved to Virginia Beach recently and are looking for a church. Walking into a new church made me think about the congregation where I serve and how we might score if we were issued a report card.

Here's my report card for Wave Church this morning. Keep in mind that I come with my own set of biases and that it is impossible, really, to accurately evaluate a church after only one visit.

Welcome - 4 out of 5 stars
We were greeted almost the moment we got out of the car. A kid came by in a really big golf cart and asked if we wanted a lift to the front door. We were greeted five times before we were shown to our seat. Their theme for the morning was Summer at the Movies. There was fresh popcorn and cans of ice cold Diet Coke in the foyer. One thing would have made me feel a bit less like an outsider: if the two people that did most of the speaking - the worship leader and, presumably, the campus pastor - had identified themselves. They talked, but I never learned their names or the role they held at the church. At SLCC, we try to get everyone that speaks on stage to simply begin with, "Hi, I am __________ and I _____________ here at South Lansing Christian Church.

Worship - 5 out of 5 stars
The band was hot. The choir was rockin. The vocals were clean and all the music, as near as I could tell, was originally written by the worship team. I loved that the worship leader read scripture during the service (Psalm 18). They even did a couple of things one might consider "traditional." They read prayer and praise requests and they kept the children in the service before dismissing them to their own lesson time just before the sermon. (The kids playfully followed someone in a clever life-size frog costume!)

Word - 1 out of 5 stars
I am being generous here because I believe that God's Word never returns void. The Holy Spirit uses even our feeble efforts to do something good. The Senior Pastor, Steve Kelly, is in Australia teaching so the church presented a heavily edited version of The Blind Side as part of the Summer at the Movies series. Video clips of Pastor Steve interrupted the movie three times so he could offer spiritual insight based on the film. The video transitions were seamless and clean. Aside from Pastor Steve wearing a striped polo shirt underneath his red mesh jersey and shoulder pads, you might think he fit right in the movie.

Problem is, the scriptural insights were shallow and, at least at one point, terribly stretched, doctrinally. Pastor Steve talked about Jesus having a "turn-around moment" in the Garden of Gethsemene. At first Jesus didn't want to do it; then he did. Pastor Steve didn't offer much scripture.

Afterward, our friends remarked, "This is the second time we were here. We came Mother's Day, too, and both then and today there was no on-site preaching but, instead, video presentations. I doubt we'll be back."

I've served up plenty of clunkers myself, though, so I'll give Pastor Steve the benefit of the doubt and say that he is a good preacher having a bad morning.

What - 2 out of 5 stars
I wanted to to learn what Wave Church is about. What is their mission? What makes them unique? What makes them tick? One week, certainly, isn't enough time to figure that out. Or is it? If I were to try and figure out what Wave Church is about, based on today, I would have to say they are about the prosperity gospel. More than once I heard Jason (I learned his name from their website) say that God wants to prosper me. I was also told that "I need to sew my seed." I'm guessing The Wave is about much more than that, but I wouldn't have known it from just this morning.

To the rich young ruler - one who had already "prospered" Jesus said, "One thing you lack. Go and sell all your possessions and give your money to the poor. Then come and follow me."

Conclusion
Would I go back? Based on the welcome and the worship? Absolutely. Based on the preaching? I'd give it another shot. But, for me, the prosperity gospel is a deal breaker. If I were to go back to Wave Church, I'd first have to settle in my mind that my offering isn't buying me a better job, nicer car or bigger house.  I agree with John Piper. I just can't find the prosperity gospel in Jesus' words.
Posted by Frank Weller at 11:39 PM No comments: