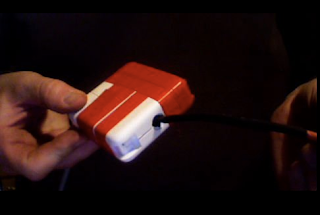 That shrinky stuff that you put on electronical wires.

Did some work tonight on my MacBook Pro power adapter. It bit the dust the other day - the second one to do so in three years. My co-worker, Wally, says it is because I am too hard on them, and he is probably right. He has had the same one for five years now. To that I say, I have had the same wife for nearly 25 years, Wally, and she is better than ever, so there!

Anyway, Wally suggested I check out iFixit.com as they have a procedure for fixing everything on the MacBook. Everything but the power supply.

So I did what any self respecting redneck would do. I went to the garage, fired up the Dremel tool and started cutting. Ten minutes later I had the case cracked and found the broken wire. With a little help from a soldering iron, some red electrical tape left over from my son's drumstick wrapping stash and some patience, I had it back together in record time.

My favorite part of the repair, however, was when I got to use that shrinky stuff that you put on wires for insulation. I don't know if you've ever used it, but it is the electricians' equivalent to the shrinky-dinks you played with when you were a kid.

You just slide it on and hit it with the heat gun and shlllip, it form fits to the repaired wire. I love the stuff. I know that makes me weird. But at least I am not as weird as the dude who wrote a Wikipedia entry about the stuff. Now that guy (or girl) has some issues.

Remember, its the little things.
Posted by Frank Weller at 12:24 AM