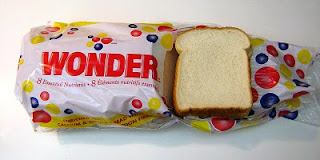 If your house is like ours, you're probably trying to be more careful about what you eat. A few months ago our doctor gave us a simple rule: don't eat anything that is white. Now, I don't think she was talking about cauliflower and milk so much. Rather, she was talking about bread and pasta and the like. We have tried to follow that rule by eating more whole grain pasta, whole wheat bread and even whole grain tortillas.

I've been stuck with whole wheat bread since childhood. Grandma Weller always had Roman Meal on hand at her house. I hated it. It is hard to say which tasted worse - Grandma's Roman Meal or the Lumberjack bread that my dad favored. I didn't know you could make bread with sawdust; I didn't know bread was supposed to crunch when you ate it.

Nowadays I don't mind the crunchy bread as much. It's tasty enough and, if it is better for me, then great.

Today, though, when I went to the bread outlet to pick up a couple of loaves I was disappointed (okay, not really) to find that they were out of the good-for-you stuff. They had dozens of loaves of Wonder Bread, though. White wrappers. Multi-colored dots. Memory filled.

I was tempted to untwist the tie right there and take a big whiff. Thinking that the clerk might wonder what a forty-three-year-old dude was doing with his head stuck in a plastic wrapper, though, I waited until I got home and had supper. Tracy made pot roast and veggies and it was great. I pulled out a couple of slices and dipped them in the au jus. Oh. My. Goodness. A super-tasty carb-filled trip down memory lane.

It is a small thing, and I expect that I'll be back chewing oats again pretty soon. (Much sooner when the boys find out there is Wonder in the pantry.) I'm pretty certain that a little bit of bleached flour isn't gonna kill me. I'm not going to make a habit of it.