A piece of my past

No, I wasn't "born in a barn." But growing up in rural DeKalb County, Indiana, I suppose it was inevitable that much of my young life would be spent in a barn. Our farm was one of the first settled in the county by one Arthur Heitz. His name was painted on the side of the barn - the side that faced the dirt road. I prayed they would pave that road so I could buy a skateboard, but to this day it remains a dusty gravel byway with washboards that have to be grated down a couple times a year.

In the barn, near the stable door, stood an old cast iron water hydrant. When we first moved to the farm we used the hydrant to draw water for the pigs. Eventually the water line cracked and we resorted to hoses. When we left the farm all those memories remained behind. Until a couple years ago.

I happened to stop in one afternoon to visit the family that lives there now and asked them if I could buy the hydrant. "No," replied the matriarch, "but you can have it." I borrowed Mike's reciprocal saw (the same one that was later stolen from my van - I still owe you for that one, Mike) and zipped it off the concrete.

Scott sandblasted and painted it. I plumbed it up, and Lee welded some bolts to the bottom so I could install it as a water feature in our Butler, Indiana backyard.

We brought the hydrant north with us to Michigan when we moved two years ago, but it wasn't until two nights ago that Jonah and I installed it at our Grand Ledge home.

I wasn't prepared for how that simple act made me feel. I felt at home - maybe for the first time since moving to this river town. I guess there is something really grounding about having a piece of my past so near me that is, likely, two or three times older than I am. Every time I leave the house I hear the water splashing. I see the galvanized steel bucket, gleaming below the spicket. I run my fingers across the cold cast iron. It ties me to my past.

Oh . . . the whole point of this post. Patti asked me to post a picture of the fountain on Facebook, but I was having trouble uploading it. The shot was taken at night, so it is tough to catch the whole effect. I'll put up another when it is daylight, Patti. And here's hoping that something from your past reminds you, as this bit of metal does for me, that you are blessed in the present and hopeful for the future. 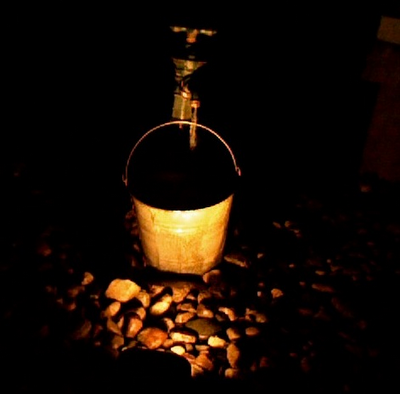 Here it is during the day: 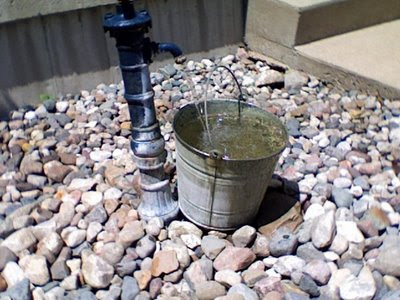 I remember that saw. I wish someone would steal the one I bought to replace the one that got stolen, it's a piece of junk. Funny thing is, it's the exact same saw. Maybe the Butler thief would trade me?

Missing seeing this Bucket in Bytler! Hope all is well!