Yesterday I passed along something I learned from a Rob Bell sermon. There was a belief among the Jews in the first century that at some point a savior would come and would raise from the dead all the good Jews that had previously died. These righteous Jews would then follow him into Jerusalem where the city would become a place of peace, joy and prosperity that would spread to the ends of the earth.

Believing that Messiah would come from the east, down the Mt. of Olives, it became a favorite burying place for the Jews. [The 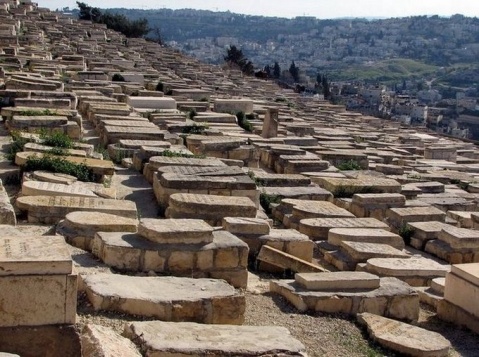 photo on the right is a picture of the modern day Mt. of Olives. Notice the gravestones.] They called it, “the place of the great resurrection.” With their tombs so conveniently located, they could join Messiah's procession into Zion.

On the day of Jesus' triumphal entry into the holy city, Jesus was confronted by the Pharisees telling him to hush his disciples. He replied, “if my followers were to remain silent, even the rocks will cry out.” We read that and think, "Oh, isn't that nice, the rocks will start talking." The Jews to whom Jesus was speaking, however, would have understood Jesus to be making a backhanded claim to be Messiah - that indeed the tombs would open and the righteous, resurrected Jews would proclaim His praises.

What I didn't pass along in my sermon were Matthew's words in Matthew 27. Writing about Jesus' death, Matthew records,

Then Jesus shouted out again, and he gave up his spirit. At that moment the curtain in the Temple was torn in two, from top to bottom. The earth shook, rocks split apart, and tombs opened. The bodies of many godly men and women who had died were raised from the dead after Jesus' resurrection. They left the cemetery, went into the holy city of Jerusalem, and appeared to many people. (Matthew 27:50-53, NLT, italics my emphasis.)

Wow! Jesus is Messiah!
Posted by Frank Weller at 9:46 AM

I've been looking for weeks, this is the first blog that makes total sense! I mean, there are several other thought's I've had, like rocks crying out (old stone tablets that have just recently been found) declaring the Bible's accuracy of Jerusalem as well as the Hittites, and there could be numerous meanings as many scriptures show, but this one! I think this is it! Thank you so much...