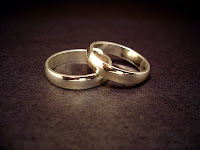 My dad used to say that a man who didn't keep his promise to his wife couldn't be trusted to keep his promises to anyone else. What does that say about the Republican Presidential candidates? I don't presume to know why so many in the field are divorced - who's at fault, what happened. Rather, I merely observe that there are three candidates who are married to their first brides:
Mike and Janet Huckabee, Ron and Carol Paul, Mitt and Ann Romney.

Does it matter that the others are divorced? Is fidelity in marriage a requirement for the Presidency? When a man stands before the preacher and promises, "til death do we part," and then goes back on his word, why should I believe him when he raises his right hand and intones, "I do solemnly swear to uphold the constitution of the United States of America"?

Or am I just too old-fashioned?
Posted by Frank Weller at 9:48 PM

I don't know much about politics, but I totally agree with you on that one. Love you

Ronald Reagan had divorced and remarried....and in my opinion he was the best President in my lifetime, which goes back to 1958.

While Huckabee seems like a good man, I question some of his political records.

Yeah, Bruce, and here's the thing. There was quite a stink about that fact. I recall that being a distinct issue with Reagan. Now there is nearly no mention of the issue. Giuliani's three marriages barely get a mention.

Why the assumption that it was the man only who broke the covenant?

If it would make a difference to you, Fred Thompson was raised and baptized in a non-instrumental church of Christ.

I'd prefer the "always faithful" candidate, but I leave room for the "that is what some of you were" candidates too. I used the "if his wife can't trust him" argument during the Bill Clinton administration/campaigns. Now I'm not so sure I can trust any of them.