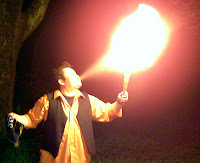 According to the Associated Press, a guy from Berlin was nearly incinerated when he nearly drank gasoline from a flask. The good news: he spit it out. The bad news: he spit it on his cigarette. Which was lit. With fire. Ich bin ein moron.

BERLIN -- A German man in the northeastern town of Gross Godems was being treated for serious burns Monday after accidentally setting his apartment ablaze when he mixed up a bottle of gasoline with alcohol, police said.

The 56-year-old apparently grabbed the wrong bottle and took a swig from the gasoline flask, then spat it out when he realized his mistake.

The man's name was not released.

He burned his Godems. Now they are Gross.

Who keeps a flask of gasoline in his apartment?

Proverbs 10:14
Wise men store up knowledge,
but the mouth of a fool invites ruin.

There's got to be a sermon here!