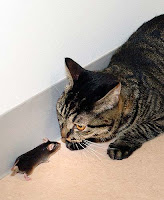 Ananova is reporting that Japanese scientists have created a genetically modified (GM) mouse that does not fear cats. Think about that a minute. Do you suppose that, out of respect for the mice's newfound confidence, cats are going to throw in the towel. As sure as Tom chases Jerry, I don't think so.

There is a reason that "mousy" is a synonym for "timid," "fearful," and "shy." That's how mice are supposed to be. It's what has kept them around for the thousands of years since they managed to avoid being trampled by the elephants on Noah's ark.

Humans have their own version of fear avoidance. Although not genetically modified to avert our natural fears, we certainly have been culturally modified (CM?) to lose them. There was a time when a boy feared getting his girlfriend pregnant. When my friend Mike got his gal pregnant in high school, his father made him drop off the football team, get married, and get a job. Just a few decades earlier he would have been forced to quit school, too. Fear of early fatherhood kept us in check. It helped that girls were equally afraid of having to quit the cheer leading squad, and worried that their reputations would be sullied by over-amorous behavior.

Not any more. There isn't any fear of pre-marital sexuality any more. Not even the fear of sexually transmitted diseases has curbed our sexual appetite. I actually heard a radio doctor reading from a recent medical journal study encouraging early sexual activity as a means of avoiding teenage participation in vandalism. What?

There was a time when one of the most fearful four letter words in the English language was DEBT. The very idea of having to file bankruptcy was a horrifying as being quarantined for typhoid or tuberculosis. Families avoided debt at all costs. Maybe, just maybe, one would get a mortgage for a home, but never something so extravagant as a car, certainly nothing trivial like furniture or jewelry. Not any more. Credit companies market to consumers by suggesting that, not only is it good to pay with "the card," but it is preferable to paying with cash. Paper money just gums up the giant capitalist machine.

I've often heard the phrase, "a healthy fear," but I've never been too sure what that means. Maybe it is something akin to what I feel whenever I have to work with the wiring in my house. I fear, frankly, being electrocuted. That is, very literally, a healthy fear. Breeding the fear out of mice is one thing. But I'm pretty certain taking the human fear gene away, and its cultural equivalent - the relaxing of proper and helpful social norms - is not a good thing. At the very least, we're creating successive generations of men and women for whom, "No Fear" is more than a brand of clothing or a catchy idea for a "reality" show, but rather a mantra that leads to self destruction.

At it's worse, though, we're creating a conscienceless culture where anything - and anybody - goes. Frankly speaking, that's not a good thing.
Posted by Frank Weller at 12:20 PM