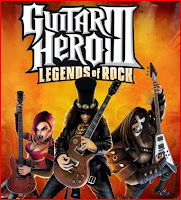 My kids and I spent about two hours Tuesday night playing Guitar Hero III - the latest of the Playstation games that are bringing back the hits of my childhood. My son, Caleb, is a whiz at the game. I struggled to play the bass guitar on "Sweet Child of Mine," while Bubba started the song in hard mode before turning around to play the lead guitar facing away from the television. Then, just to show his complete dominance over the old man, he laid the guitar on the floor and played it with his feet while I continued to fumble around on "easy" setting.

Did I mention he plays the drums, too? Uncle Marty took the boys to Wal-Mart on Monday to pick a few things up for Christmas. He dropped Caleb and Jonah off in the electronics department where they found the latest game. It's like Guitar Hero, but it includes a set of drums. Caleb, who plays in the percussion section for the Grand Ledge High School marching band, set the game to expert and proceeded to smoke it on the first time he ever saw the game. Marty told us later that Caleb actually drew a crowd with his "performance."

We had a ton of fun with my mom and dad, sister and brother-in-law, and their kids.

I hope your Christmas was blessed, too, and that the promise of the New Year brings you hope and determination.
Posted by Frank Weller at 10:56 AM