Standing on the shoulders of . . . Ron Otto 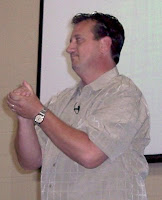 Ron Otto stopped by this morning for a visit. My predecessor at South Lansing Christan Church, Ron was youth minister when he arrived here in 1993. When he left for Lincoln, Illinois sixteen years later he left behind a legacy of outstanding preaching, impassioned evangelism, and a new building near the corner of Aurelius and Miller Roads.

To be completely frank, and that is what Frankly Speaking is all about, following a man of Ron's stature was a bit intimidating to me when I came to South last August. The guy can preach! His people skills are without peer. He is able to inspire and motivate people to action like few other preachers I know. The cool thing is that Ron has done the same for me.

I never leave his presence without a couple new ideas that I am eager to try out. I know that he has been one of my biggest supporters here at South - both to me personally, and behind the scenes with those I know.

We often needle one another. Ron is just that kind of guy. He greases people and laughs when they dish it right back. But seriously, Ron is a guy that I respect and admire. And just in case I've never told you that, I thought you should know.
Posted by Frank Weller at 12:42 PM

Anonymous said...
This comment has been removed by a blog administrator.
10:33 AM

Dan, I think you need to clarify what you are trying to say. Your right it could be taken the wrong way, so did you mean what you said or were you just trying to be nice?

Anonymous said...
This comment has been removed by a blog administrator.
6:32 PM

Thanks, Frank, for your words about Ron. We still consider him and Bonnie as dear friends. We've know him for a long time. He became our senior minister at a very dark time in our history, under conditions that were very trying. I believe that God knew that Ron was the right person to help us through that period. Thanks Ron, for being God's servant. We love you and your family so much.

Ron, took a right way..i know him and he really has some leadership quality's..thanks for sharing this with me!