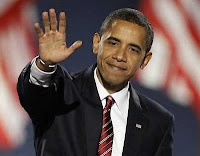 I thought President-Elect Obama's victory speech last night was amazing. While there were a couple of points on which I disagree - his affirmation of Roosevelt's New Deal, for example - I nevertheless thought it humble, genteel, and even inspiring. The portion of his speech that most moved me was when he said,

Let's remember that it was a man from this state who first carried the banner of the Republican Party to the White House, a party founded on the values of self-reliance and individual liberty and national unity.

Those are values that we all share. And while the Democratic Party has won a great victory tonight, we do so with a measure of humility and determination to heal the divides that have held back our progress.

As Lincoln said to a nation far more divided than ours, we are not enemies but friends. Though passion may have strained, it must not break our bonds of affection.

And to those Americans whose support I have yet to earn, I may not have won your vote tonight, but I hear your voices. I need your help. And I will be your president, too.

And to all those watching tonight from beyond our shores, from parliaments and palaces, to those who are huddled around radios in the forgotten corners of the world, our stories are singular, but our destiny is shared, and a new dawn of American leadership is at hand.

To those -- to those who would tear the world down: We will defeat you. To those who seek peace and security: We support you. And to all those who have wondered if America's beacon still burns as bright: Tonight we proved once more that the true strength of our nation comes not from the might of our arms or the scale of our wealth, but from the enduring power of our ideals: democracy, liberty, opportunity and unyielding hope.

That's the true genius of America: that America can change. Our union can be perfected. What we've already achieved gives us hope for what we can and must achieve tomorrow.

I am convinced that our 44th President is a good man, and there is no doubt that Obama is a great orator who has the makings of the best speech giving Commander in Chief of my lifetime. For my part, I will be praying that he is more than merely a good orator but, given that governing is so much more than making fine speeches, a good President, too.
Posted by Frank Weller at 10:19 AM

His speech moved me as well. The only thing that disappointed me that as someone who claims to be a man of God he didn't exactly give much mention of Him or even thank Him. Other than that, great speech. It made me proud to be an american... for probably the first time in my life.

The speech was definitely one for the ages. The eloquency with which he spoke, I hope will be the same standard to which he governs. I am praying for him that he does.
As for me, all I have to do is look at the history of our country, and I am proud to be an American. So few people today take the time to delve into the history of our nation, and because it isn't taught in schools as it should be, we are losing a sense of where we have come from. I do not mean where we have been in the last 8 years or the last few decades, but rather the true historical principles upon which our country was founded and the literature that was written of its struggles and it's victories to become a free nation that is unsurpassed in the history of mankind. That history is what inspires people, of all colors and races, to see an America that has an unlimited capability of being great, and offers unlimited opportunity unlike any on the face of the Earth. It's what brings them to our shores from distant lands, even illegally, to have even the slimmest of chances at free enterprise and the American Dream.
History inspires it's true citizens to know, that even in her darkest hours, through her humbling mistakes or actions, whether politically, spiritually, physically, or mentally, that the beacon of the light of freedom from the harbor still shines.
To those who gave their lives, their fortunes, and their sacred honor, we must know that we who are reaping the benefits of those sacrifices, would truly dishonor them if we say we are not proud of our country, the United States of America, and that it is truly blessed by a Sovereign God as a sovereign nation. Our duty is first to our God who asks no more from us than to obey His will, put on His whole armour, and seek His face, and pray, and He will heal our land. And after we have done everything, in Him, ....to stand.
I love America.

While the election results weren't what I had hoped they would be, Barack Obama is now our President-elect. My biggest hope is that this country gives him a chance and that we can stop all of this divisiveness. We need to come together as a country to work towards resolution of our problems. Pointing fingers at the opposing party isn't going to help us. In fact, it will continue to stand in the way of our improvement.

What we need is to put the election and campaigning behind us and look at ways we can support our new President and our country.

The direction our country has taken in the past few years has lead us here, and we do need to make changes. I don't know what President Obama will do. Maybe his perspective will be different enough that we will see positive changes once he takes office. I sure hope so.

Remember it took Carte to give us Reagan!