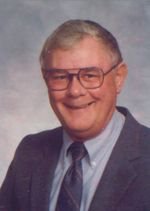 Bob Hose was a great guy. A father, grand-father and a good friend, Bob passed away a few weeks back. I presided at his funeral. Imagine my surprise when I phoned his wife Nora and heard Bob's voice on the answering machine. For a moment, it seemed as though he had never gone. Bob would have loved that. He always had a great sense of humor, clowning around with his grandchildren or teasing Nora.

At his funeral, his grandsons spoke of Bob's love of sports. He was a skilled baseball player in his youth, nearly receiving a minor league contract from the Cleveland Indians. He loved to watch his grandsons play basketball. He was devoted to IU hoops. Both his granddaughters and his grandson Ben sang. I was touched when Beth sang about home being where Jesus is (and Bob) and how she had "never been more homesick than now."

I hope Nora doesn't change her answering machine for a while. Bob's voice is a great reminder that I will see him again - that this life isn't the end. For now, it is just his voice I hear; soon enough, I'll see him, too.
Posted by Frank Weller at 9:37 AM