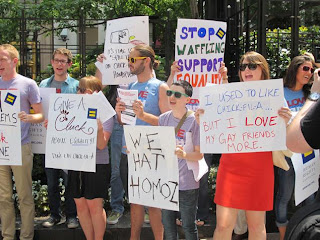 Question: When did upholding what one believes become hate?

Dan Cathy is a man under fire. So is Chik-Fil-A, the restaurant chain his father founded. In the last two weeks he has been vilified by many in the media and portrayed as a purveyor of hate by the agenda-driven homosexual lobby.

For the record, here is what Cathy said in his interview with The Baptist Press:

In other words, Cathy says his organization is based on Biblical values. Admittedly, there are those who read the Bible differently than Cathy does. They suggest that a prohibition against sex outside of the boundaries of the monogamous husband/wife relationship either cannot be found in scripture, or is out-of-date and thus irrelevant.

Scripture is clear on the subject no matter how one wants to read it.

Discard it? Okay, I get that. I disagree, but I get it. But you cannot distort part of it or dismiss a portion of it. If you’re going to throw out the Bible’s prohibition against homosexual acts (or sex before marriage, or adultery, or pornographic-induced list, or coveting another’s spouse) then you’re going to have to throw out all of scripture and not just the parts that are unpalatable to the whims of contemporary society.

Had Cathy left it at that, he might have avoided incurring the wrath of the Muppets. But here’s what he said that got Kermit the Frog hot under the collar:

We operate as a family business . . . our restaurants are typically led by families; some are single. We want to do anything we possible can to strengthen families. We are very much committed to that.

Sadly, Cathy is carrying a burden that better belongs on the shoulders of pastors, elders and church leaders. He’s getting hate mail and we’re all just hoping it will go away.

But it isn’t going to.

The scorched earth, shoot-first, refuse-to-even-engage-in-dialogue tactics of politicians like Chicago Alderman Joe Moreno and activist groups like Equality Illinois have left most of us that stand up to preach on Sundays scurrying for cover.

I get that. Nobody wants one more target painted on his or her back every Sunday. Truth is, there is enough pressure on pastors without adding the threat of being targeted by a militant organization that hates you simply for what you believe.

But Cathy isn’t a preacher. He makes chicken. And he knows something about pressure, so I am guessing he was just following his internal moral compass when gave his incendiary interview in which he mentioned homosexuality a total of zero times and spoke favorably of strengthening families and helping business owners succeed through values-based entrepreneurship.

Call what he said old-fashioned. Out-of-touch. Or even sadly misguided.

But it is not hate.

It is simply espousing what Cathy (and billions of others on the planet) believe to be fact – that we are created by a divine being that defines standards of acceptable behavior for his creation. And that a departure from those standards (AKA “sin” – of any kind – not just the sexual kind) results in trouble for the one deviating from God’s plan, and trouble for any culture that applauds, promotes, and welcomes such a departure.

Cathy isn’t going to wake up tomorrow and decide that Chik-Fil-A is going to do a one-eighty on this issue. He is principled. His values and his faith mean more to him than the bottom line and quarterly dividends. It doesn’t matter how many kissing gays and lesbians besiege restaurants this week, Chik-Fil-A would sooner begin serving sausage burgers than reverse course.

Militant gays can shut down Chik-Fil-A. The company can implode, and the protesters can do a happy dance on the ashes of a corporation destroyed by holding fast to its principles. But what will the gay rights advocates have accomplished? Tens of thousands will lose their jobs. Millions of chickens will save their skin.

But this chicken isn’t concerned about saving his skin anymore. Or losing his job for that matter. I’m standing with Dan Cathy and Chik-Fil-A.
Posted by Frank Weller at 3:29 PM 1 comment: