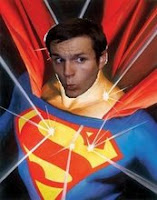 My buddy, James Pahl, wrote an interesting post on his blog the other day. I agree with most of what he said (even the bit about Michigan needing a Sonic). I took issue with this, though:

" . . . I don't like it when people tell others who they are voting for. I can't explain it but something about it just rubs me the wrong way. My father is a county magistrate, and must always be impartial in all hearings and duties that he performs. He thinks it is inappropriate to discuss who he is voting for because it shatters that responsibility. I've always respected him for it and agreed with it. For me personally as an aspiring youth minister I've decided to place the same responsibility on myself. As a leader I do not want to use my position to sway anyone, whether intentional or not. Perhaps I've subconsciously forced that ideal on others. I mean, what is the purpose of sharing your decision? I don't mean this to criticize anyone who has done so, I'm genuinely curious."

There is no written or unwritten mandate for impartiality in Scripture. The closest one comes is in regards to a good soldier becoming entangled in civilian affairs. I suppose one can make a case, based on that passage, that all Christians should remain silent concerning their civic responsibility and duty. The case is stretched in my opinion.

I agree that we should not impose some "God's will litmus test" on a specific candidate. [To suggest that God wills we vote for one candidate over another is hubris.] I believe the American people get what the American people want with all the intended and unintended consequences that accompany that choice. God, frankly, often gives us what we want, too. Sometimes He does so knowing that we're not going to like what results from our choices.

I believe we can passionately disagree during a campaign, and still unite following an election. I am not one of these "he's-not-my-President" sorts. I will pray for President-Elect Obama and those who accompany him to the White House.

Oh, and James, you owe me for driving traffic to your smorgasbord.
Posted by Frank Weller at 8:22 PM

Hi Frank, just wanted to let you know I sincerely appreciate and agree with your thoughts, both in this blog and in response to my previous comment.

I hope my post did not come off as an indirect counter aimed directly at your former post. It was the culmination of several different things and I vented, blogging as quick as I could without gathering my thoughts.

When it all comes down to it I am glad that the campaigns are over. There was so much media bias and ridiculous propaganda floating around on both sides that in some ways it was hard to find what each candidate stood for. Now that it's all over the country can (hopefully) unite and move on as you have articulately already suggested.

I will also add one interesting trivia side note: I watched it all Tuesday night from the State that has almost always voted for the winner of the election. In fact, after this week Missouri has now only voted for the candidate that didn't win twice in the history of its participation in elections. That's my fun fact of the day.

James,
You will gain even more wisdom and insight into what Frank is saying if you will go here;
http://www.youtube.com/watch?v= xoW1mfDBaas&feature=related and watch & listen to a business associate of mine, Bob McEwen, who is the former congressman from Ohio under the Reagan and Former Bush Administrations.
I've had a couple of very good conversations with Bob regarding your very topic. This is a six video segment talk. Listen to them and give me your feedback on my email:
stardog@myibocs.com